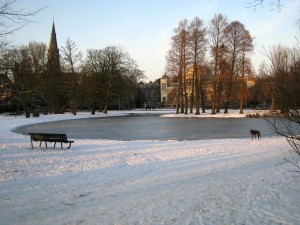 Beautiful Vondelpark in the snow.

HELLO EVERYONE! I wrote my last weekly post at the end of 2012 and then was amazed at how many new readers signed up for my blog when I announced I was no longer going to write weekly. So I thought I would pop in at the end of each month with an update on post-op sleeve life, which is a lot different than life the first year after surgery. I’ve really enjoyed the first real winter here in Amsterdam (and first real winter in all my 59 years!)… the snow has been beautiful and I’ve managed to learn how to dress to stay warm.

But as I start the new year in a new country and a new climate, this is how I’m affected by my post-surgery life: 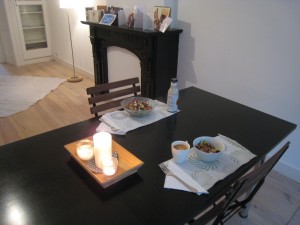 Our lunch every day is a salad… this is lunch in our new house with very little furniture yet!

MY NEW NORMAL: I have to say that, for me anyway, it really took a year, maybe even 14 months, to feel fully healed from the surgery. I can’t say that I truly enjoyed eating much for the first year, but it didn’t bother me, either, because the trade-off was so huge. Now, 15 months post-op, I have a pretty good routine down. There isn’t anything I can’t eat; even pasta and rice are fine. When I do have either, it’s just a few bites and I’m satisfied. I never thought I would ‘crave’ protein, but I can tell when I need it. I eat an egg for breakfast 2-3 times a week, often with a piece of toast and a couple pieces of bacon. Other days, I just have some yogurt with a little granola on top or some cheese and a cracker. I always eat a half an apple on my way home from the gym. But of course every morning starts off with coffee and cream! 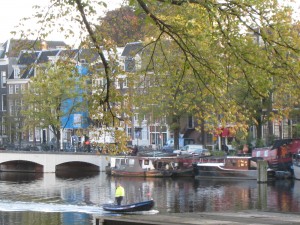 Most states on the mainland have their sports and teams that they cherish – football, basketball, baseball, NASCAR – the banners and logos and hats and t-shirts are everywhere when the teams play. In Hawaii, once a year at this time, our little Hilo town comes alive with the Merrie Monarch Festival.

This is the Super Bowl and Olympics of hula rolled into one week, an internationally acclaimed competition that brings out the most dedicated hula dancers in the state – men, women, old, young, large, small, mostly of Hawaiian descent, who have studied the art, the traditions, and the culture – and have spent thousands of hours preparing for this revered event.

This year, the most coveted honor, Miss Aloha Hula, went to Rebecca Lilinoekekapahauomaunakea Sterling. Yes, people here often have long Hawaiian names like that! What I love is that women don’t have to be slim and drop-dead gorgeous to earn this title; it’s based on skill, dedication to the art, and pure performance. Many of the dancers are large, some are old, some are incredibly beautiful, but no matter what size you are, if this is what is in your heart, the hula community will welcome you.

Seems I’m on the 1–2 pound a week weight loss plan, which is just fine with me. I’m feeling pretty good, and until I get to a place where I can have some consistency in my life in terms of eating and exercising, I think the slow weight loss is a good thing.

This week marks exactly one year since we left Hawaii on our “year of being homeless,” and it seems fitting that we ended up in San Francisco, where we lived before moving to Hawaii. It’s been a magical year, and when we left I had hoped I would lose weight over the course of the year, but I never planned on having surgery and losing almost 60 lbs!

I opted to only tell a few people. I am very happy with this decision, but there are times I feel like a bit of a fake. So many people comment on good I look – and then ask how I did it. I usually say I eat mostly protein and very few carbs (which is true), and then I also tell them I had to do something because my weight was causing so many problems with my hips, knees, and feet. (The mirror and shopping for clothes were pretty bad for my self-esteem as well!) But I have to say I feel a little twinge of guilt that I also had some major help (and support from my husband) to get me to this point.

The most interesting part about this is that I feel good at the weight I am now, even though I am still 25 lbs overweight. I can’t picture myself 25 lbs lighter. I think I will look gaunt and wrinkly, even though I am still heavier than my husband (but I’m closing in!) and heavier than many of my friends. So I’ll just take it slow and see what happens. 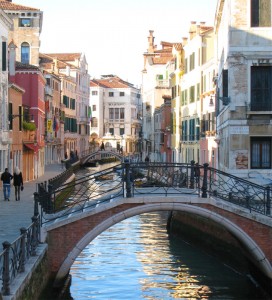 No pizza, no pasta, and no wine! This may not have been the wisest choice in places to visit nine weeks after WLS. There are 100 Italian restaurants to one of any other type; Italians don’t quite get the concept of diversity when it comes to eating. I think I am the only tourist in the history of Italy who visited and ate mostly soup!

Venice … just as gorgeous as you can imagine, but check out the blonde on the left who has legs that go on forever, and of course her thighs have probably never touched! (What does she eat???)

Our first night in Venice we went to a very charming, local, small, family-owned Italian (what else?) restaurant. Watching the people who worked there and the locals who came in was like watching a scene out of the movie The Godfather. Attention all casting agents: just have a cappuccino here and you will have all the characters you need for your next project! Another thing about restaurants here, if you don’t order vino with your meal, they look at you suspiciously. So when I ordered a pizza (scraping off the top again) and nothing to drink, and we didn’t eat the bread they brought, and I only ate one slice of this huge pizza, I’m sure they thought we were odd indeed. The proprietor asked (looking genuinely concerned) in his heavy Italian accent, “Wassamatta? You no-a like-a my pizza?” So another lie to just say I wasn’t feeling well. 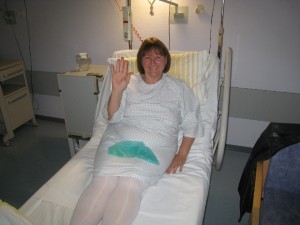