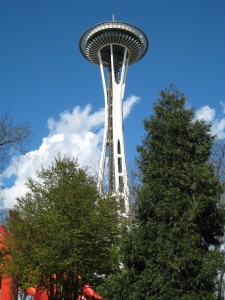 I made it to Seattle last Monday where I re-joined my husband after spending a week with my sister in California.  This is where we started our year of travel last February.  It almost seems like a dream when I think back over the last year:

We sold our home and business in Hawaii in Nov 2010, ‘semi-retired’ and put all out things in storage and decided to be ‘homeless’ for a year.  Turns out, this has been the greatest year of my life.  After being in Seattle for a few months, we drove across the US and Canada for a 6 week road trip, stayed in Boston for a month in June, then flew to Europe where we were for 6 months.  When we returned to the US in January we started our road trip back to the west coast going the southern route.  All a mix of sight seeing and seeing people in our lives.

Being in Europe was life-changing for both my husband and me.  I was having lots of hip and knee problems and feeling pretty low because I seriously felt like the shortest and fattest person in Europe!  After some long talks about my health and our relationship, we decided to do something about my weight which was getting to the point that it affected our lives.  So I had the sleeve done in the 4th month in Europe; the 9 month of our journey.  Sure didn’t plan on that when we started out!  But there is no looking back; it’s all been fantastic. 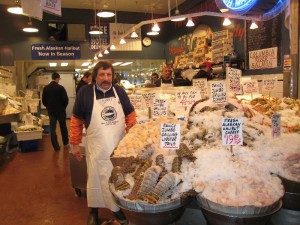 Wonderful fresh fish at Pike’s Place in Seattle…..we love all of it!

So here we are, exactly one year later in Seattle.  As soon as I arrived this week I went to Pike’s Place and bought fresh crab, scallops, shrimp and salmon!  All incredible.

I also made an appointment at a clinic because I had run out of the medication I take that keeps me (and all of us) from getting gall stones.  The medication I had been taking I got in Germany and was called Ursofalk.  The doctor here was really nice and prescribed me the American version called Ursodial, but his instructions were to take it 4X a day!

I wasn’t happy with that, but then when I picked it up; I saw they only gave me 60 pills; enough for 2 weeks.  So I had to call the pharmacy who called the doctor and they called me back and told me the doctor said take it once a day!  HMMMMMMM

Something didn’t seem right, so I went on the Vertical Sleeve forum and asked our buddies there what they thought…..most said they did take Ursodial, but twice a day!  So that’s what I’m doing……I hope that’s right.  One of the challenges when you don’t live in one place and don’t have one doctor…..still, I was grateful for the feedback.  That forum has been wonderful.

As you can see I lost no weight this week and I have been eating very little.  I don’t know why this is happening; but right now I just want to feel healthy and not worry about what the number on the scale says.  I know I’m eating less than 1000 calories a day; my husband eats at least twice as much as I do, probably more and he’s 159 lbs!  So go figure.  I really am OK with not losing much or fast (I keep thinking it will keep the hair on my head).  And it will eventually come off a little at a time.

Resistance bands are great and inexpensive!

I have started exercising regularly now that we are in one place for a couple of weeks.  I use the stretch bands in the morning for strength and resistance; along with some good stretch exercises.  And today I went for a 3 mile walk.

OH!  The doctor did give me a B12 shot and I think that’s helped my energy level; and I’m doing pretty well taking all of my supplements.  Not so hit and miss right now.

So for week 19 in beautiful Seattle, thanks for following along.  We’re here for another 10 days then off to Honolulu!

Have a great week!