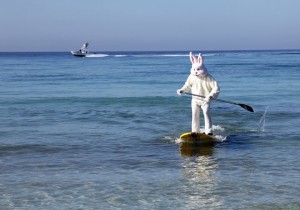 Happy Easter from Hawaii… looks like the Easter Bunny found his way to this little dot in the middle of the ocean… as I didn’t lose an ounce this week! First time I haven’t had a loss since Week 18! But I have to admit, I didn’t deserve to lose anything. I haven’t exercised as consistently as I had been and I have eaten richer foods and more sweets than normal, although the portions have been very very small.

What happened that I got a bit derailed? The same thing that happened so many times in the past: we had company and I cooked differently than I do when it’s just the two of us; or we ate out more, and had more desserts. Even though most of the time, I ate teeny portions, I still ate richer stuff. I worked out on the elliptical machine one day because our hanai daughter prefers the treadmill (so do I, but I let her have it). But the elliptical hurts my hip, so I was out of action for a couple of days. Little things, but they all make a difference. 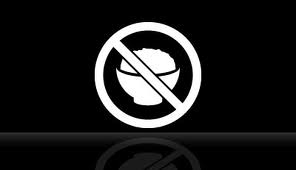 Just say NO to rice!

We also had lunch at our favorite Japanese restaurant in Hilo called Miyo’s; a wonderful place and true institution in this town. Wonderful food, but I made the mistake of eating some rice (one of my first attempts since being sleeved). I had about 3 bites; it tasted really good so I was happy. But oh did I pay for it the rest of the day!!! So I have learned that my new tummy is still healing so there will be no rice for me for a while. I guess that’s a good thing, but it is one of the few foods I miss.  (Note to future sleevers out there:  I don’t miss it that much and love my new life style a million times more than a few bites of rice or pasta!). 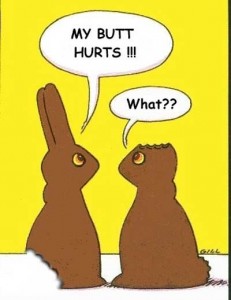 IT JUST PROVES THAT EVEN WITH THE SLEEVE, YOU HAVE TO PAY ATTENTION AND WORK AT THIS.  Having said that, it’s a lot easier to be motivated with the sleeve because you can see changes both ways; unlike BTS (before the sleeve), it seems like it was so easy to gain weight, but so hard to lose it. And, at least for me, there’s a new awareness of it all.

So even though the scale didn’t move, we  had a fantastic week and I wouldn’t change a moment of it.  Just being able to keep up with my very fit husband and Amelia who is very fit and limber was enough of a reward! A far different visit than last year when the two of them went off alone because I couldn’t even walk places with them. 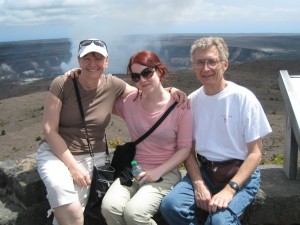 At the Kilauea Caldera at Volcanoes National Park

We had a wonderful hike up at Volcano National Park; we drove over to the Kona side of the island and spent a night at one of the beach resorts there; we took some Lindy Hop dancing lessons where Amelia was the star of the class and my husband and I were hopeless.

Today we are off to a friend’s house for Easter Brunch….so more food, but also wonderful company and a beautiful sunny day.  I am going to try and be much more diligent this coming week and get back on track so I can get back to my weight loss goal of 1 lb a week. 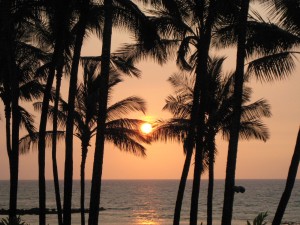 Sunset in Waikoloa taken this past week.

Wishing each of you a wonderful Easter Sunday, warm tropical breezes, stunning sunsets, and sending you lots of aloha from Hawaii….