WOW – WEEK 41. I am 9 months post op and I’m only 4 lbs from the top range of my goal weight according to the chart above from the Centers for Disease Control (click on link to calculate your status). My BMI is only .7 away from me being labeled as NORMAL. A far cry from my starting weight of 223 (OBESE) and a BMI of 39.5. So, although this last 10 lbs is taking forever to lose, I’m at least within striking distance. Not sure where I will land, but I think bouncing around the 130’s will be a good goal to aim for the future. 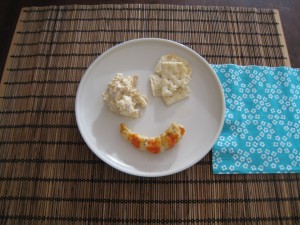 This was all I could eat at a meal, one month post op

What do my meals look like 9 months post op? Much better, much healthier, and much more volume now than a month or two after surgery. I also am able to drink a little with my meals, unlike the first few months.

There are saltine crackers on both plates; these are a staple food of mine, not so much because I love them, but because they seem to keep my stomach ‘settled.’ When I eat them, they seem to stabilize the other foods in a way that my stomach doesn’t feel as heavy after I eat. They don’t sell these in Amsterdam; I had to have a friend bring me some after surgery and will have to be sure our friends who visit us always come with a fresh supply! These and Pretzel Thins are my favorite foods.

Try picking one of these up; it’s not easy….and I’ve lost the equivalent of two of them!

The last 9 months have been such an interesting time no doubt. I remember being one month out, having lost about 30 lbs and feeling so good, almost thin; that was at 189 lbs! Now here I am at 9 months out, 145 lbs, and I can barely pick up a 40 lb weight in the gym just to move it out of my way! And in total I’ve lost almost 80 lbs!

For those of you who have been following my blog since Week 1, you’ll remember that I traveled in Europe and the US for the first 4 months after surgery…it was a daily challenge to figure out what, where and how to eat, but somehow I did it. Then we landed in Hawaii, I got a pretty good routine down, and I feel like I have been doing OK. I have never gotten as much protein in as I should, but my blood work was good, I feel like I have been eating pretty healthily (although very small amounts), always worked my afternoon coffee and something sweet into my day, worked out consistently every day, and have lost about a pound a week since we settled in here.

This past week, I was in Honolulu on the island of Oahu for some work-related projects and I feel my food world was a mess. I did drop a lb, but my exercise was inconsistent, my food intake was weird, and I never felt satisfied; I felt hungry but nothing I ate tasted right. I was making poor choices and although it was only 4 days, I feel now at 9 months post-op, I had a harder time with my eating this past week than I did with 4 months on the road early on. Not sure why, but maybe my body is now more used to a routine than it was in the beginning. I have never had a nutritionist to call like most VST patients and at times, I wish I did. I’ve really just relied on the little information I got from my doctor, the VST forum, and my own knowledge to guide me in what I should be eating. 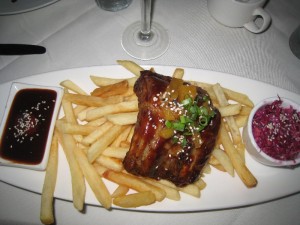 Even though I only ate two of the ribs and one french fry (honest), it wasn’t a good choice.

One of the things I think about when dining out is that I don’t want to spend a lot of money on an entree where I know I will only eat a small portion. So sometimes I end up making a bad choice because it’s cheaper. The other night, I chose an appetizer of ribs and fries instead of fish (knowing I wouldn’t eat any fries) because it was half the price (even though I knew I wasn’t paying). So I need to get over that and just choose healthy even if it does cost more. 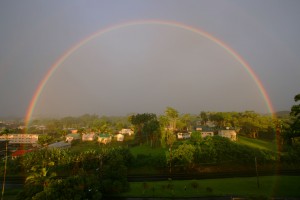 Nice view right outside our window!

Outside of the bad food choices and the fact that I was working on a project, Honolulu was sunny and beautiful, but it was nice to get back to Hilo last night. This is a photo my husband took outside our condo; there are no more beautiful rainbows than in Hawaii. We only have two months left in the islands before we head to Amsterdam, and we know they will go by fast.

Wishing all of you healthy eating days and lots of rainbows.