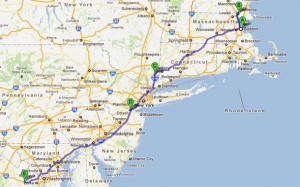 I know I just posted a few days ago but I’m trying to get back on my regular Sunday posting.  We landed in Boston on Wednesday afternoon, checked into our hotel about 6pm and although it was almost midnight European time, we went down to have some dinner in the hotel restaurant.  WOW!!!  An American menu, with food we know and love and so many choices!!!  Hmmmmm, my weight loss progress could seriously be derailed now that we are back in the US.

I ordered a bowl (not a cup) of clam chowder; it came with those little oyster crackers and it was heaven!!!  Of course I could barely eat half of it and wondered why I didn’t order a cup instead but I was just excited.

The next day I went into a Rite-Aid and had a bit of culture shock at all of the choices of stuff!!!  Not just food but so many things.  I tried to fill my European prescription for Nexium but they were having none of it; but they told me that Prilosec OTC would work as well.  I bought it, came back and Googled Prilosec vs Nexium and was comforted in knowing they are both so similar.  The reason I didn’t get it fully filled in Europe was because it was almost $100 for one month!  (Vs. $13 here for the Prilosec, so I’m glad I waited).

But the snack food options were amazing and I ended up buying stuff I probably shouldn’t have; I think I need to be more diligent here.

That night we had dinner at friends:  she fixed a big bowl of pasta and a salad.  I felt so bad as I pushed the pasta around the plate pretending to eat it.  Of course she noticed and I had to once again let my hostess down and lie that I wasn’t feeling all that well.  I am able to eat salad now so that was good.  Yikes, it’s going to be a long month of this kind of stuff as we visit friends across the country. 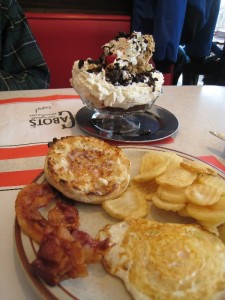 I only ate the bacon and egg and a bite of the toast!

After two nights in Boston we headed to New York via Cabot’s Ice Cream…..an institution outside of Boston that has gigantic ice cream sundaes and was a favorite of my husband’s when he was going to MIT in the 70’s.  He wanted me to be sure and say he NORMALLY does not eat this kind of stuff for lunch, but this day he did.  I had an egg and some bacon so I was perfectly happy.  But again, you would NEVER see this type of old fashioned restaurant with huge portions in Europe!

Off we went to NY to stay the night at a one of my best friends; thankfully she is one of the few people who knew I had the surgery so it was so nice to be able to eat so little without making excuses.  On Saturday we headed to New Jersey to have lunch with friends…..once again apologizing for eating so little (soup, crab cakes and salad…..all divine and tasting so good after Europe).

We’re just outside of Washington DC right now at my nephews house (whose wife is from Finland and stunningly gorgeous).  The food issue is going well here without anyone noticing and I am so grateful for that.  Funny thing is, they hadn’t seen me in ten years so didn’t comment on my weight loss because I gained most of it in the last 10 years; so to them, I looked the same! 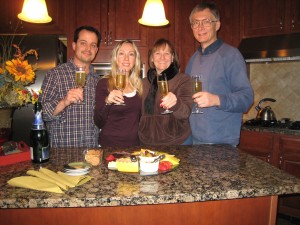 This is what happens when you visit people; they pop the champagne and put out food.!!!

As you can see from the title, I don’t know what I weigh today….(my scale is packed away again….).  My guess is that I am the same….I feel I have been eating too much the past few days and I certainly don’t feel any thinner; especially next to my nephew’s wife!

We’re happy to be back but we’re not sure it’s a fit for us any more….we’ll have to see as we go along.  We went into a grocery store and all my senses were stimulated in a way that they never were in Europe…..this is not a good thing I think.  So stay tuned…..hoping to find a scale and make good choices this coming week.

Thanks for all the nice comments from last week!